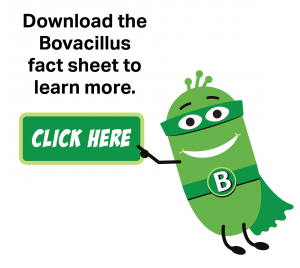 Probiotics are natural bacteria that are found in soil, plants, skin and feathers of animals. The term probiotic is derived from the Latin preposition “pro” which means “for” and the Greek word “biotic” meaning “life”. Probiotics are often called good or helpful bacteria because they help to keep the gut healthy. Probiotics are widely used in humans as daily supplements and included in yoghurt, cheese, breads and drinks. The World Health Organisation (WHO) defines probiotics as “live microorganisms which when administered in adequate amounts confer a health benefit on the host”.[1]

In animal health and nutrition, there has been increased interest in the use of probiotics over the last 10 years as alternatives to other feed additives. In 2011, Nutriment Health became the Australian distributor for Chr Hansen’s Animal Health Division. Chr Hansen is a global leader in probiotics and Corporate Knights ranked them as the world’s most sustainable company in 2019. One of the biggest issues with probiotics in animals is how to get live bacteria into an animal through feed. This is especially an issue when pelleted feed is used, as the temperatures involved in pelleting feed can kill many species of bacteria. Bacillus bacteria are fed in their spore form which are inherently thermostable and become vegetative inside the animal. Nutriment Health markets different species and different strains of Bacillus probiotics. Just as there are differences between a broiler chicken and a layer chicken, a beef cow and a dairy cow, a merino lamb and a crossbred lamb, there are differences between bacterial strains of the same bacterial species. Strain differences in bacteria can result in different enzymes being produced and different sites of activity within the digestive tract of the animal. All the strains marketed by Nutriment Health have been carefully selected by Chr Hansen from their bank of over 30,000 strains. These strains have undergone identification and characterisation of 16S rDNA, the analysis of cellular fatty acids and differentiating individual phenotypic tests. This is done by the DSMZ – German Collection of Microorganisms and Cell Cultures and results in each strain being allocated a DSM number (Deutsche Sammlung von Mikroorganismen) Chr Hansen is continually researching new species and strains of Bacillus bacteria for different animal species. We currently market probiotic products for poultry, pigs, cattle and other ruminants. Please contact Nutriment Health for more information about which product is best suited for your animal production system. If you want further technical information on the use of probiotics in cattle, contact Nutriment Health so that one of our team can guide you through the Chr Hansen white paper on “Bacillus: A key feed stable technology to enhance cattle productivity and health”

For more information on the use of probiotics in cattle, poultry or pigs, please contact Nutriment Health